"The Vietnam War had a great influence in my art and shaping my personality", Long Nguyen

Long Nguyen is an award winning visual artist and actor of over a dozen feature films and episodic television shows. Long is the winner of two "Best Actor" awards. One for "Journey from the Fall" in the 2006 Newport Beach Film Festival and one for the short film "Apsara" in the 2003 California Independent Film Festival. 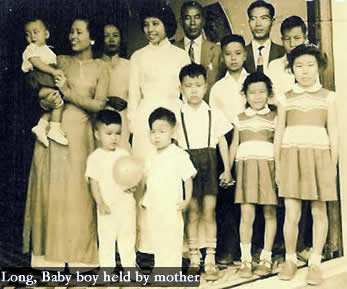 Long is also an accomplished artist and has exhibited internationally. Long’s mid-career retrospective exhibition was completed in 2003 at the San Jose Museum of Arts. The retrospective exhibition traveled to the Hillstrom Museum of Art in Minnesota in February of 2005. Long’s paintings are in the permanent collection of the Oakland Museum of Arts, the San Jose Museum of Arts and the Triton Museum in Santa Clara. Among many of his awards, Long was a recipient of the National Endowment for the Arts grant, the Fleishhacker Foundation grant and a two times recipient of the California Arts Council grant.

Bijan Tehrani: You are an artist who has worked in many different fields from painting, sculpting, and acting. How is it that you can work in all these fields and even teach as an art teacher at the same time? How did you manage to do all this?
Long Nguyen: By luck (laughs!) What I mean by luck, is that being any of these things takes a lot of luck. Being an artist, you need a lot of luck to survive; being an actor you need luck to go out, to audition, and as a teacher you need luck to be able to communicate to your students and help them learn. In that sense, I’ve been lucky three times because I’ve been juggling all three. Fortunately for me, it worked out perfectly because they complimented each other. By being a better teacher and communicating better with my students, I learned to be a better actor. By learning to become a better actor and get deeper into the skin of my characters and become more in-touch with my emotions, I became a better artist. In becoming a better artist, you connect with everything else. I’m very lucky that I can finally find a connection between these three art-forms and I can only guess that the connection is inherent in all disciplines.

Bijan: Do you think your life is unique because you’ve come from Vietnam and you’ve lived a hard life and witnessed many difficulties? You are not like people who are living in comfort and take life for granted. You know that it’s a precious thing that can be taken away at any moment, so you’ve grown a hunger where you want to tell your stories through different avenues of expression.
Long: Absolutely those events have helped me tremendously in my art, my acting, and my teachings. I think that when you are in situations of hardship like wars, like unemployment, or death in the family, you don’t see any possible benefit because you are too busy suffering and getting through that experience. After surviving those experiences, you find out you have opened some doors that help you to relate to everything else. The Vietnam War had a great influence in my  art and shaping my personality. Without that war, I would be a very different person. Coming to America, surviving as a refugee, making a living, learning English, and surviving a different culture was also a tremendous experience for me. I can’t recommend it to everyone (laughs), but I see a lot of value in that. It’s a mixed blessing; it’s a blessing after you survive it.

Bijan: One thing that I believe is that in the veins of artists who are coming from difficult situations is a better freedom in regards to demonstrating their feelings compared to others that live in comfort. Do you think this is true?
Long: I think experiencing difficulty is inherent in any existence and any circumstance , whether physically or mentally. How we use it in our life make us who we are . Just because I survived the war , doesn’t mean I have more difficulty than anybody, or I can express feeling better. I can only say my personal difficulty is one of the basic foundations of my own creative process.

Bijan: Do you think that people are still interested to hear about oppression and the problems that foreign artists face? Do you think there is any interest in listening to their stories and experiences and to what they want to say? Because I see that the trend in art right now is more towards entertainment. In an entertainment field, many have that approach towards art where they don’t like to hear sad stories.
Long: I think we are all lazy on a universal level. So most of the audiences want to see “fell-good” films, then they complain that “all” films are formulaic and boring. Most of the artists and producers also get caught in the circle of making money and therefore making “safe” films. There is effort to be made from both sides. From the artistic side, specially the foreign artists, I think we can try to understand the “people” better. I have faith that if the artists can reach that universal core in their works, there will be an audience .

Bijan: Do you think that what you are trying to express through your work— with the films that you’ve acted in and your artwork—is not only to tell the story of the past, but to tell what can happen in the future because you’ve experienced many things in your life?
Long: No, I don’t think anyone can do that. On the other hand, everything in life has that universal quality that we can glimpse the possible passage of time thru their development. For example, looking at a bean sprout with its system of seed, stem , root and srouting leaves, one can visualizes the original seed in the past and a mature bean stalk in the future.

Bijan: One thing that you mentioned that was very interesting is your concern over your personal growth. One thing that also makes me worried—I deal with young artists and students as well—is this individualism in an extreme. Some artists become isolated inside their own worlds and they believe that they should only worry about their own situations artistically. How do you see this situation and how it applies to yourself?
Long: You are right, some artists love themselves too much and they stay in their bubble and never learn anything new. I think life is very interesting; it forces you to live in the moment and go from it. It’s basically like presently you just asking me a question; I can play safe by give you a standard answer, or I can listen to your question and give you something really personal in the moment. How much of art is an artist’s feeling inside a bubble, how much of art is the interaction between the artist and the outside world, and how much of art is just the force of life—fate, disaster, and other events that happen outside and inside the bubble that shape one’s life. I’m not sure, but for me I know that it’s not about getting informations and stuffs , it’s about how you live in it and how you feel about it. That is the fuel for our works.

Bijan: We both come from cultures in which relationships with friends, family members, and neighbors are very close and emotional. One thing that I have noticed about the lives of artists in the United States is that in other countries there are communities for artists that utilize coffee shops and various other hang-outs where they can share their ideas and speak about their work. This helps build a kind of trend, a kind of culture, in that sense. Here, I see that artists are so isolated and it’s rare to see that type of interaction between artists. Do you think that this is something that is missing in the whole world, or mostly here?

Long: I think that is a different advantage. Every situation has its own advantages and disadvantages. In a culture that is very nurturing, the artist gets some types of benefit from that. In another culture where it is very isolated, then the artist gets other types of benefits from that. It depends on the artist; you seek out the environment that is good for you. Sometimes you have no choice, and then you must do the best you can. But in every situation, you can do something—and that is the nature of art. It is very positive in that way, because you don’t need much, one can always start with a pencil and paperI am not denying that there is a problem of isolation; I’m just saying that it can have its advantages. Some people say that prisons are institutes of isolation and are only for people getting punished, but then we have people who seek out places of isolation like temples and in nature to gain peace and to clear their thoughts. It all depends on the individual. I’m not saying that America doesn’t have problems; it’s just a different situation here. It’s not as nurturing as, let’s say Istanbul or Paris, but America has that…myth about it (laughs).

Bijan: I think one thing that I can say, I was saying this about California at least, is that it doesn’t have that many special requirements. You can just pitch up your tent, put up your flag, and be a part of life here with your own identity. That’s a great thing about this place.
Before I get too far ahead of myself, I wanted to ask you about your future. Are you planning to make any short films, documentaries, or movies as a director?
Long: Not yet, I’m having tons of fun wearing many hats and perhaps too many. The directing hat will have to come after the writing hat.

Bijan: You are a great actor; did you go to any type of school for acting, or did you enter the field without experience?
Long: Well, this tells you something about life. It’s so funny, it threw me a curve ball. I didn’t plan to study acting at all, but in 1992, Oliver Stone had an open call for Heaven and Earth. I went to the open call in San Francisco, and somehow I got a part. That’s how I got my start. I never really had a lot of money to get a sustained training, but I took some night classes and actually learned a lot on the job. I’m very happy that I had this door opened for me through fate.

Bijan: Are there any actors whose work you follow?
Long: I really liked Daniel Day-Lewis. He is truly a master of transformation. He was The Butcher in Gangs of New York and then transformed into an Oil-man in There Will Be Blood. That is the true sign of an artist right there; he doesn’t work all the time, but when he does, he really works. I like many different actors and actresses. How about you?
Bijan: There are so many, but mine might stem from older times; individuals who gave life to the film industry.