A month to this date 6 /7 /2010. The art world and community of Arab artists lost one of their most accomplished and devoted Lebanese artists of the 20th and 21st century, Mr. Andan Al-Masri is one of the few Arab artists who created Arab/Islamic art that is enjoyed and appreciated by all members of humanity. His art i...s universal, bridges the Optical Art of the west and the Arabic calligraphy of the east. His unique compositions and integration of conceptual intent insure his place in history, both by art historians and critiques alike. 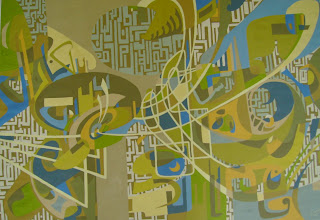 My first introduction to Mr Adnan Al-Masri was in 2003 after I acquired the Khaim collection. A call was put out to artists for artwork that commemorated and celebrated the Israeli withdrawal from south Lebanon . Adnan Al-Masri was one of the first artists to answer the call. Adnan Al-Masri’s art glorifies the strength of the Lebanese resistance and the endurance of the southern Lebanese people. His paintings are statements about the infinite nature of self sacrifice and generosity for the sake of others, be it the nation or humanity.

The majority of Adnan Al-Masri’s paintings incorporate optical illusions comprised of broken geometric shapes interrupted by straight lines. This technique creates the illusion of looking through a broken mirror at pieces of a puzzle comprised of segments of Arabic words and letters. In reality the imagery is impossible to decipher, initially creating a sense of confusion and frustration.

Adnan developed his own school of thought that combines aspects of Sufism and Greek philosophy. Adnan’s concepts are rooted in Greek philosophy and the school of Greek thought. His imagery is inspired by Plato’s writings pertaining to shadows and light and the true reality of man. Reality is not the physical body, but rather the higher form that is independent of the body, id (I) and self.

His interest in Sufism is reflected in his use of repetitive geometric shapes that create the illusion of a whirling Dervish. The purpose of the dance is to attain higher consciousness, and purifying the soul with the use of repetitive, circular motions. Anan’s work is not only pleasing to eye, it is equally pleasing to the intellect and spirit. His paintings are reminiscent of great jazz masterpieces by Miles Davis. His art crosses cultural boundaries, yet remains true to his origin.

Adnan Al-Masri was a very well mannered man from the old school of Arab culture. He was a fine example of the beauty and importance of Arab hospitality and tradition, dress and culture. He remained Secular Humanist throughout his life. During his adult years he lived through two civil wars, the first in 1958 and the second in 1974. Both wars were based on religious ideological descent and were supported by the west. He repeatedly articulated his love for his country and people, and his desire for the Lebanese people to unite. He repeatedly said, “ Lebanon is for everyone who calls his or her self Lebanese.”
Adnan Al-Masri’s presence will be greatly missed. He remains in our hearts and lives through his art.
Naim I Farhat
Posted by Unknown