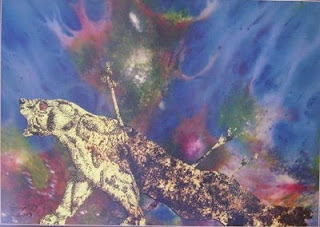 The Wounded Lion of Babylon, mixed medium on board, measures 16x29 inch's.

Born 1943 to a Lebanese mother and an Iraqi Father, Omran Al-Kaysi,is one of the well known artists, historian, and art critics in and around the Leventine and the Gulf countries. He is published in many art magazine and newspapers. He has exhibited in Montreal, Baghdad, Amman, Madrid, and London. He also participated in many group exhibitions as well as being one of the main organizers for the 2002 Khiam symposium in Southern Lebanon.

In his painting," The Wounded Lion of Babylon" Omran Al-Kaysi shows the inflicted wounds of the lion by three spears, each of which represents three separate wars which occurred within the last three decades in Iraq. The first spear represents the Iraq-Iranian war during the 1980's which left millions of people destitute and hundreds of thousands of casualties on both sides. The second war in which Saddam Hussein violated and raped the sovereignty of Kuwait during which time Iraq was forcefully withdrawn from Kuwait and the American Air force bombed the the defeated army of Saddam Hussein, killing many of the Iraqi soldiers who by then were weak and defeated, to create one of the worst massacres in the history of Iraq which was later called, " the highway of death". For the second time Baghdad was bombed under the orders from George H. Bush Sr. The third war came after the embargo and sanctions were imposed on the Iraqi people for over a decade and again Baghdad was bombed on the false pretense that Saddam Hussein was holding weapons of mass destruction and collaborating with Al-QED. This mission was accomplished by George W. Bush Jr. "It took thirty years for Henry Kissinger's vision to become a reality in controlling Iraq.

The three spears symbolize the three wars for the last three decades. It will take Iraq over a century to regain it's strength and independence if and when the "roaring lion of Babylon" is able to survive and heal it's wounds from those wars.http://www.bible-history.com/history/slion.htm
Posted by Unknown