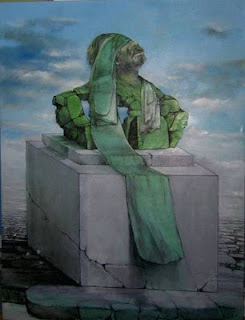 Adnan Yahya, a Palestinian artist born in 1960 to a family who like many Palestinians in Amman, Jordan, can trace back his ancestry back to Yafa

Jordan, being a fairly young country which was established in the early twentieth century by the British and was used as a pressure valve to ease the pressure in the shift of Palestinian refugees being forced out of their homeland and being relocated to make room for the influx of Zionist terrorism against the indigenous population of Palestine.
My first knowledge of Yahya as an artist was when I acquired the first of many of his paintings from the Made in Palestine traveling exhibition in 2004. Later on my visit to Amman, Jordan in 2007, I was able to make his acquaintance by visiting his home in the Um-Al-Thawarah district of Amman. After being introduced to all members of his very pleasant family. I was pleased to learn that two of his children are named after two historical Shi'ite religious figures, "Hamza and Jaafar" the other two named Naji, after the character artist, Naji Al-Ali and Omar, after a Sunni historical character. When asked regarding the names of his children he answered, " I have no division beliefs between Sunni and Shiites. The concept of division serves only the policy of colonization and that is what the "West" is trying to implant in the minds and hearts of the people around the Arab World which is what we see happening at this moment in Iraq, "the Sunni Triangle"

One cannot ignore, from close-up study of his work, to see that Adnan Yahya is an historical archivist who documents the history of his people through his paintings, sculptures and ceramics. He is most undoubtedly a new school of aesthetics who stands on his own, in his artistic ability and humanitarian thought.
Yahya treats his composition with a Post-Surrealist approach in which his subjects are magnified sculptures of deteriorated images of generals who represent the tyranny of the "Super Powers" frozen in the past time zone. It is only logical to visualize power as "statuary" because every powerful leader strives to build a large and larger monument which immortalizes their earthly existence on the expense of their own people or other people whom they have colonized. His use of insects, such as ants and cockroaches as symbols of soldiers who are transporting death, destruction and disaster from one place to another with disregard to life and humanity.
Farhat Art Museum highly encourages people with high respect to mankind to view in close-up his art exhibit at the Foresight Gallery in Amman, Jordan beginning October 13Th and running through the month of October.